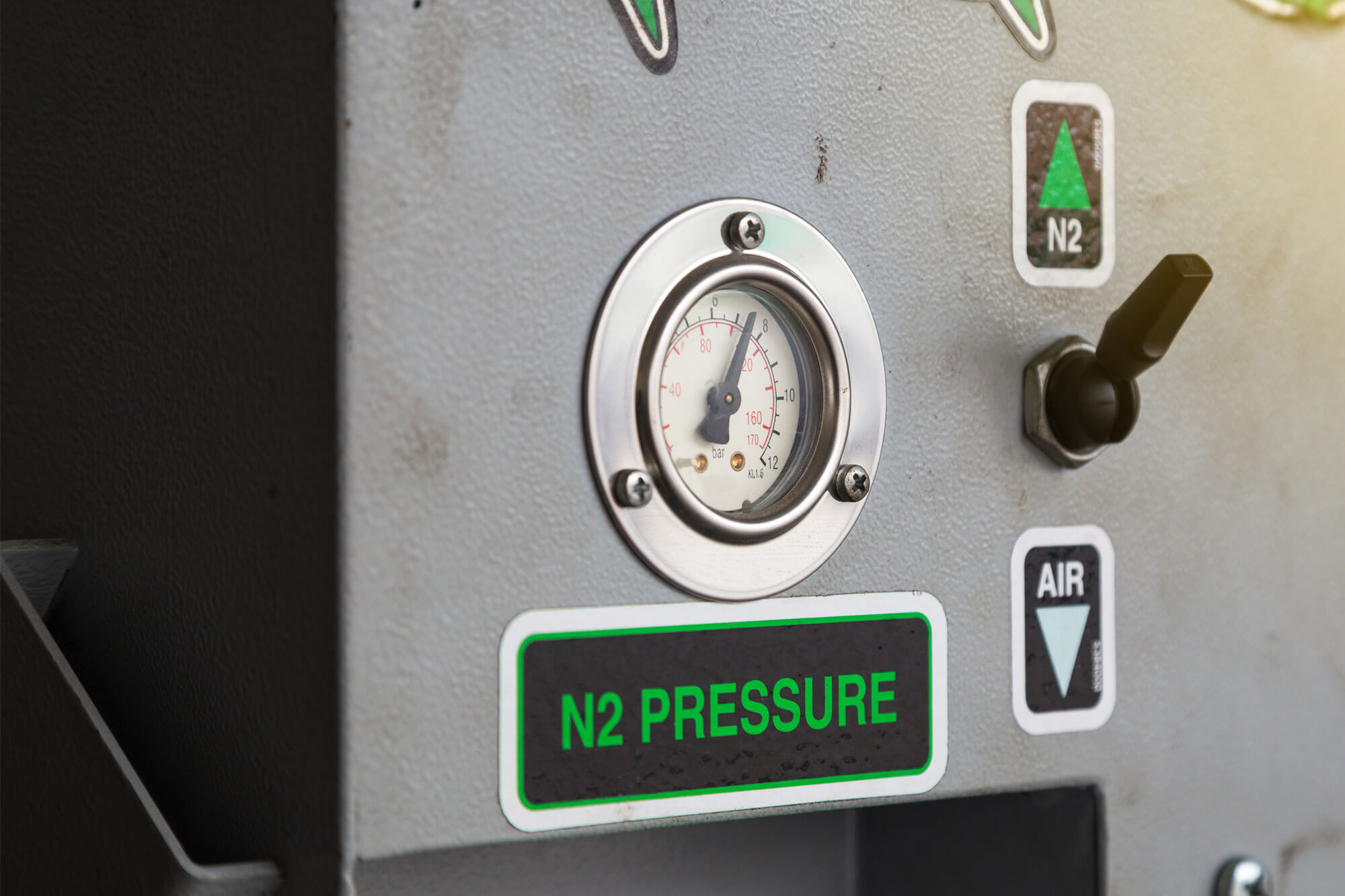 Everything There is to Know About Nitrogen-Filled Tires

By Mony HannaJanuary 9, 2023No Comments

Well, yes and no. There are many advantages to using nitrogen in tires, ranging from a slower pressure loss of up to 40% against air-filled tires to less variance in pressure when subjected to high speeds, and less oxidization damage over time. But there are also many areas where nitrogen-filled tires and air-filled tires aren’t that different. After all, regular compressed air consists of 78% nitrogen to start with, alongside oxygen and various other ambient gases.

The real question is whether the advantages of using nitrogen-filled tires outweigh the inconvenience and cost associated with their installation and maintenance. Therefore, if you’re trying to decide whether nitrogen-filled tires are worth the price, you should start by considering a few of the major pros and cons that come with them.

Let’s start with the benefits. Truth be told, the only vehicles that really demand nitrogen-filled tires are those used in specialist industries like aviation, construction, space travel, and high-speed racing. Nitrogen-filled tires are a great boon in these fields, as nitrogen is an inert, non-flammable gas and, therefore, safe to use in extreme heat, speed, and load scenarios.

But what benefits do nitrogen-filled tires offer to regular drivers? Their primary advantage is losing pressure up to 40% slower than air-filled tires over time. Tire pressure, measured in PSI (pound per square inch), fluctuates seasonally and throughout the day. When cold, the air inside a tire contracts, bringing the internal PSI down by as much as 1 PSI per 6 degrees Celsius. When the tire warms up again due to friction on the road, or a weather-related temperature increase, the air inside expands to its original state. During this expansion, some of the air seeps through the tire’s rubber exterior, eventually reducing the tire’s overall pressure.

Nitrogen is less affected by these swings in temperature, as it has a higher atomic radius than oxygen. This means its molecules are bigger than oxygen molecules, so they’re harder to push out of the tire when subject to expansion. As a result, nitrogen-filled tires retain their optimal PSI for longer than air-filled tires and require less frequent refills in ideal conditions. This is a significant benefit as a driver, as a tire kept at its recommended PSI suffers less wear and tear than underinflated or overinflated tires, making for a safe, smooth drive and saving you money on fuel over time.

Nitrogen-filled tires have some other minor benefits beyond this too. They are less susceptible to temperature changes, so they have less handling variance than air-filled tires. Nitrogen also bonds with water less quickly than oxygen, so less moisture gets into the tire during the drainage and refill process, preventing oxidization damage and tire rot in the long run.

While the benefits of nitrogen-filled tires seem impressive, they can end up looking insignificant when you consider the drawbacks that come with them. For the average driver, there’s no discernible difference between driving with nitrogen-filled and air-filled tires, so the only tangible benefit of the former is the slower pressure loss over time. Losing pressure at a slower rate means you’ll spend less on fuel and tire maintenance, but these savings might be negated in the long run owing to the high cost of installing, filling, and draining nitrogen tires.

To begin with, depending on your dealership or tire service provider, nitrogen-filled tires can cost three or four times as much as air-filled tires to install, while regular refills can cost anywhere between $5 and $15. On top of this set-up cost, if you end up adding regular compressed air to your tires in an emergency or because you’re too far from a nitrogen supplier, you’ll need to have them drained and refilled to achieve nitrogen purity again. This service comes at around $30 a pop, so if you do it more than once, the costs can begin to stack up.

The final thing to consider is the convenience factor. Finding a dealership, garage, or filling station that supplies nitrogen can be tricky, especially if you live out in the sticks. While every garage has a compressed air machine, not all have nitrogen-filling tanks, so you may drive further afield and thus spend more on fuel every time you require a simple refill.

Can you mix Air with Nitrogen in Tires?

If you’re wondering whether you can put air in nitrogen tires if your pressure is low, then the answer is yes. This will, however, diminish the benefits associated with having just nitrogen in your tires, as you’ll also increase the presence of other gases inside. Your tires are essentially filled with regular air at this point and will lose pressure at the same rate as any normal tire. Still, you’re better off filling up with traditional air than driving with a low PSI.

If you do choose to drive with underinflated tires, you’ll immediately negate all of the benefits that nitrogen brings in the first place. Whether filled with nitrogen or not, underinflated tires are at risk of undue tread wear, serious ruptures, and even blowouts on the road. For this reason, it’s never worth driving on low pressure while waiting for a nitrogen top-up. After all, you’ll be better off taking the $30 hit for a drain and refill down the road than having to shell out for a new set of tires when yours blow.

The Importance of Maintaining Nitrogen-Filled Tires

Even though nitrogen-filled tires lose air slower than regular air-filled tires, they still need topping up regularly. Make sure to check your PSI at least once a month, in the morning, when the tires are cool and, therefore, at their lowest pressure for the day. You can do this with a shop-bought pressure gauge, and if you’re unsure of your vehicle’s recommended tire PSI, just check the driver’s manual or driver door sill to find out what it is.

Ultimately, nitrogen-filled tires’ advantages are tiny compared to the benefits of proper tire maintenance. Keeping your pressure topped up will give you a better driving experience and save you more money than nitrogen alone ever could. If you’re thinking of using nitrogen-filled tires in order to get away with less maintenance, you’re playing a losing game, as in the long run, you’ll only end up losing the money you save when your tires degrade and end up wearing out.

Air in Tires vs. Nitrogen: The Final Verdict

So, which is better for your tires? Nitrogen or regular old compressed air?

For the average driver, the answer is simple. Compressed air is easy to find, cheap to fill up on, and available at almost every dealership and garage in the country. These factors make it easy to keep your tires topped up and running optimally, giving you a smoother driving experience, greater fuel efficiency, and a longer overall tire lifespan. Compressed air is also a reliable option in an emergency, as you’ll never have to drive very far to find a top-up point.

For those who want their car to operate at absolute peak performance, nitrogen is theoretically the better choice. Nitrogen-filled tires lose less pressure over time than compressed air tires, which means they retain their optimal PSI for longer without needing a fill-up. They still need their pressure checked regularly. However, if you fail to top up on nitrogen when your PSI drops, you’ll lose all of the aforementioned benefits.

In short, if you’re a budding astronaut, rally car driver, or just a regular motoring enthusiast looking to get the best out of your vehicle, nitrogen-filled tires are the superior choice. They are expensive, however; for most people, regular air-filled tires are much easier to maintain at an optimal level. The most important thing to remember is that no matter which option you choose, you should regularly check your tire pressure and top it up if it’s low. Doing so will not only save you money over time but also give you a safer and more enjoyable driving experience on the whole.

Mony Hanna is the owner and operator of Sipan Tires & Rims. He has dozens of years of experience in the tire and aftermarket wheel industry. Get in touch with Mony today to get the best deal on Wheels and Tires in Ottawa.