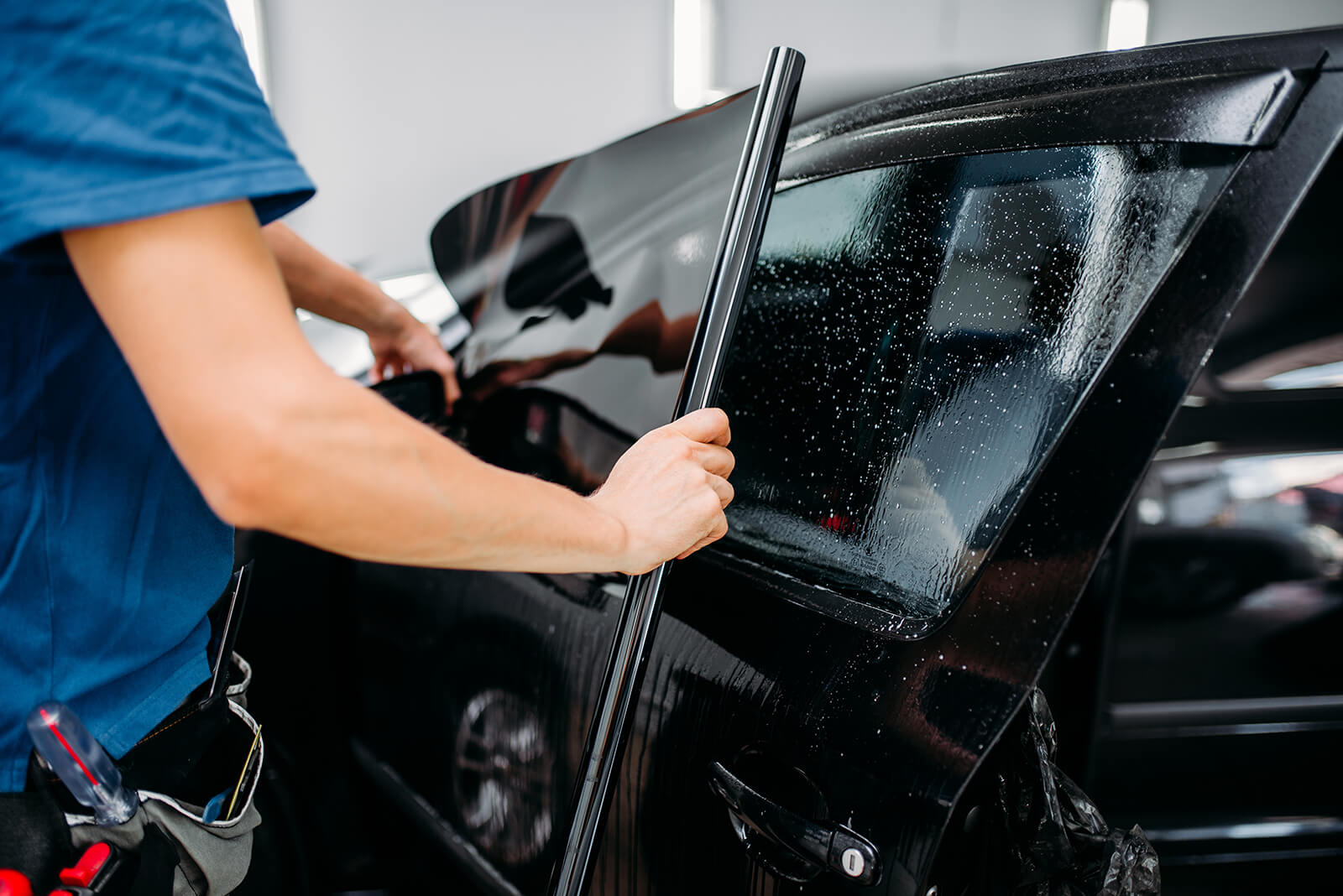 A Guide to Getting Car Windows Tinted in Ottawa

Window tinting has been around for quite a while, but it was the high-rolling movies of the 1980s and early 90s that made it something everyone wanted on their car.

Starting first as a way for the limousine-set to keep the outside world from looking in, it wasn’t long before window tint was turning up on all sorts of vehicles.

Over the years since then, manufacturers have continued to develop new and innovative tints that do more than merely darken the windows. Window tinting today prevents heat damage, deters thieves from shattering windows, and can even filter out, cancer-causing, ultraviolet light rays. Of course, as the technology has evolved, so too have the regulations. And, while there are many great reasons to tint your vehicle’s windows, we’re going to start with laws. There’s no point in spending the money on a great tint-job, only to find you need to peel it all off and pay a hefty fine.

The rules regarding window tinting are pretty varied. In Canada, the federal government sets the controls for vehicle manufacturers. So if your car has a stock window tint, it is regulated federally by the Motor Vehicle Safety Act. When it comes to aftermarket tint application, the laws are set by the provinces, and they all approach it quite differently.

The first thing to get out of the way is where they all agree. It is illegal to put any aftermarket tint on the windshield in all provinces and territories in Canada. It’s also against the rules to apply any coloured or mirror-type reflective coverings to any of the windows.

When it comes to the driver and passenger side windows, BC, Alberta, Saskatchewan, Nova Scotia, and Prince Edward Island, don’t allow it at all.

In Ontario, you can tint all of the windows except the windshield. However, where it gets tricky is knowing how dark of a tint is permitted. The law states that drivers must be able to see each other and that a pedestrian must be able to make eye contact with a driver. Ultimately, what this comes down to is police discretion. If they think your tint is too dark, they will hand you a fine between $110 and $500. It will then be up to you if you want to challenge their assertion in court. The rule of thumb tends to be about 30 percent tint on the front side windows, which means that 70 percent VTL (Visible Light Transmission) is allowed. Conveniently, a 70 percent VTL on the front side windows is what Quebec specifies in its regulations.

At Sipan Tire and Rims, our specialists keep up to date on all local tinting regulations for both sides of the Ottawa River, to ensure our customers don’t find themselves on the wrong side of the law. If you have questions, talk to one of our team today.

In the years since Michael Douglas and Charlie Sheen rode up Wall Street in the back of a darkly tinted limo, the technology has come a long way. In the early days of window tinting, the purpose was solely to darken the windows. With the right amount of shade, politicians, celebrities, and business moguls were hidden from the outside world. Today, customers have options when it comes to the type of film they use on their windows, and the tint itself does so much more than it ever did in the past.

One of the fabulous benefits of adding tinted film to your vehicle windows is that it reduces the amount of internal heat build-up during the sweltering summer months. Not only does that make it more tolerable for the driver getting into a car that’s been parked in the sun for several hours, but it takes less energy to cool the cabin to a comfortable level. The shorter the time required, with the air conditioner blasting, to bring the temperature down, the greater the fuel savings and cost reduction.

Most everyone has a memory of that old family car with the split vinyl dashboard. And while today’s interiors are made of better-treated materials, the power of the sun to magnify through the car’s windows and cause damage is still very real. Today’s tinting technology is capable of blocking the sun’s harmful rays enough to help keep your leather finish looking new. Of course, we always recommend using a sunshade in the windshield when parked for long periods in direct sunlight to make up for its lack of tint protection.

Of course, by tinting your windows, you make the items inside the vehicle less evident to passersby. And, as the old saying goes, out of sight, out mind. However, with today’s window films, even if a thief is intent on shattering your window, they will find it’s nevertheless an effort to get into the car quickly. Despite being broken, a tinted window will still need to be cut out of the frame, all while the alarm is sounding and drawing attention. So, even though the window will need replacing, odds are any valuables will still be secure inside.

Many of the tinting films available today have the added benefit of blocking the entire Ultra-Violent spectrum of light from entering the vehicle. UV light rays are known to be harmful to the skin. They contribute to wrinkling, sun damage, and even the possibility of developing skin cancer.

When it comes to choosing the variety of tint for your vehicle, you have several options. Each of them has slightly different advantages and, of course, there is a range of pricing options. Our window and tint specialists can help you decide on the right fit for your needs and budget.

The Dyed Film option is the most affordable tint available today. While not quite as advanced as the others, it still provides many benefits. As the name suggests, a layer of dye is placed on an adhesive film. The film is then affixed to the inside of the windows to create the darkening effect. Dyed tint film provides some solar heat absorption and privacy for the vehicle. However, the benefits are primarily cosmetic, and the colouring will fade a bit over time.

This style of tint has microscopic metal particles embedded into the film before it gets adhered to the inside of the windows. The reflective nature of the metal deflects a good deal of incoming heat and makes the windows more shatter-resistant. However, there have been occasional complaints about it obstructing cellular service, radio reception, and GPS coordinates. Usually, only in areas where these signals are weak already.

The carbon content of this style of tint will block up to 40 percent of infrared rays from getting into the vehicle. And, infrared being the spectrum of light that causes heat, means your car will keep cooler overall in the summer sun. With no metal, there is no issue with radio signals, and the colour won’t fade over time, ensuring you won’t need to replace the tint while you own the car.

The latest advancement in tinting technology, ceramic film, is the most expensive option, but also the best tint on the market. Cutting out up to 50 percent of infrared light means it provides a considerable reduction in solar heat entering the vehicle, higher than all the others. Ceramic film also blocks 99 percent of ultraviolet rays from coming through the windows. This advancement protects your skin from the spectrum of light known to cause sunburns and skin cancer. Since it contains no metal, there are none of the radio signal issues. And yet the ceramic particles woven in, make the windows highly shatterproof and fade resistant.

Of course, no matter which tint option you select, all of them provide benefits to you as a car owner. Whether your primary focus is temperature control, glare protection, or keeping people from seeing what’s in your backseat, we can help. Give us a call: 613-695-8866 or come by the shop. We’re always happy to talk tint.